Two At A Time

by The Two Man Gentlemen Band 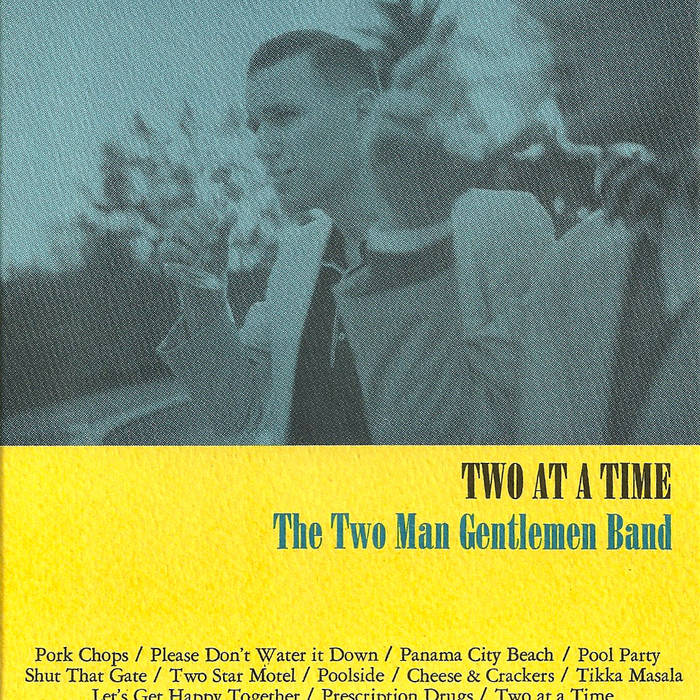 Irreverent songwriters, expert instrumentalists, former street-performers, and consummate showmen, The Two Man Gentlemen Band has been barnstorming from coast to coast for half a decade, developing a reputation as a must-see live act on the roots and retro music circuits. A tenor guitar and string bass duo in the tradition of the great Slim & Slam, The Gents have obvious affection for pre-war American Jazz and Western Swing. But they’re no period piece. The decidedly contemporary feel of their lyrics and the hilarious, often ridiculous, improvised banter that peppers their live shows combine with the music for a thoroughly modern ruckus. “It’s as if,” one reviewer commented, “The Smothers Brothers were young today, wore better suits, and wrote hot jazz songs about drinking.” To The Gentlemen, that sounds about right.

To make their latest album, Two at a Time, (on Bean-Tone Records) The Gentlemen employed an extreme contrast of modern and old-fashioned techniques. They funded the project with an online fan-fundraising campaign via Kickstarter. But, once the budget was in place they switched their computers off for good and proceeded to record, design, and package the album without the use of any digital technology.

The Gents recorded live to monophonic analog tape in Pasadena, CA using exclusively 1940s and 50s microphones and equipment. Manning the tape machine was Wally Hersom, seasoned operator and collector of vintage recording equipment and former longtime bass player for Los Angeles contemporary rockabilly legend Big Sandy & His Fly-Rite Boys. Free of any digital effects, edits, or band aids, the result is a vibrant, honest document of a pair of musicians seasoned by years on the road, sounding just like they want to sound. There are mistakes, imperfections, and a bit of tape hiss, but it is The Gentlemen’s energy, skill, and uncanny musical connection that shines through above all.

To package the CD and LP editions, The Gents turned to Stumptown Printers in Portland, OR. Using hand-set lettering, a refrigerator sized linotype machine (one of the few in the country still in operation), darkroom film prints, and an offset printing press, the folks at Stumptown created a one-of-a-kind package untouched by the graphic design software responsible for nearly every bit of printed matter one sees. If someone goes to the trouble of purchasing a physical CD or LP, The Gentlemen believe, it ought to come in a container worth holding on to.

Over the band’s six previous albums, Andy Bean, singer, tenor guitarist & banjoist, and principal songwriter for the band, has developed a knack for writing “smart, funny, sharp-rhyming songs that put them in the company of classics like Louis Jordon and Louis Prima.” (Boston Phoenix) His ten originals on Two at a Time continue in that vein. Foods, beverages, and generally having a good time are the dominant themes. Please Don’t Water it Down describes how difficult it can be to find a well made drink when the only bar open in town is a chain restaurant. Pork Chops, Cheese & Crackers, and Tikka Masala cleverly blend cuisine and love. And Pool Party… well, who doesn’t like a pool party? Acknowledging their increasing debt to early jazz and western swing, two obscure tunes learned from Jack Guthrie and Lil Hardin Armstrong, respectively, round out the record.

Throughout, The Gents limit themselves to two instruments: Bean’s 4-string electric tenor guitar, played through a vintage 1937 Gibson amplifier, and Fuller Condon’s upright bass. Audiences are consistently amazed that The Gents can raise such a ruckus as a duo. Two at a Time is the first of their albums to accurately capture that experience. Clever arrangements, “keen vocal harmonies” (The New Yorker), and “virtuosic playing” (The Herald – Glasgow, UK) that hasn’t lost the ramshackle edge of their street-performing years make up for what the band lacks in size.